How much is your government spending on infrastructure?

How much is your government spending on infrastructure?

over 2 years ago By Karis McKenna

The Australian Infrastructure Budget Monitor is a report issued each year that provides a summary of Government infrastructure investment. The report breaks down spending by state and provides an analysis of how data compares over time. This article will provide a bite sized version of that report which will cover all the most critical information. If you’d like to view the full report, you can do so here:

Who’s spending all the money?

Unsurprisingly, NSW and Victoria have the lion's share of infrastructure spending in the near future. However, the figure is roughly inline with each states population, with both states accounting for 68% of total spend while containing 58% of the population.

The graph below highlights the clear growth in NSW infrastructure investment since 2006. The clearest change is from 2016 when total investment stood at around $10 billion, compared to around $22 billion in 2019. One must wonder whether this level of spending is sustainable, and if not, what happens when the funding tap is turned off?

There are a number of major projects driving these increases including the Sydney Metro West, Sydney Metro Greater West, Western Sydney Airport as well as significant spending in health and education.

The graph below shows a similar story for Victoria with investment increasingly sharply since 2015.

Transport projects are clearly a high priority at the current time.

Queensland comes in a distant third place in overall infrastructure investment. Interestingly, when we compare the below graph to those of NSW and Victoria, there is no clear rise in investment in recent years. This is partly due to Queensland’s reluctance to adopt asset recycling as broadly as NSW and Victoria have done. Only time will tell whether this was a wise choice. The investment outlook for Queensland is considerably less dramatic than that in NSW and Victoria but it also means there is less chance of a dramatic drop off in projects in the mid term.

On a per capita basis, it was the Northern Territory that is way out in front with a spend of $12,896 per person, compared to a national average of $7,347.

Where’s the money coming from?

Interestingly, government revenue forecasts show shortfalls in the future and yet all state governments have increased investment from the previous budget. NSW and Victoria has benefited considerably from asset recycling (sale of assets such as WestConnex) which has provided the funds required to continue spending in the near term. It’s the topic of another article as to how this strategy stands up in the long term.

Do you want even more information?

If you’d like to see even more detail than that provided in the full report, I highly recommend checking out www.infrastructurepipeline.org. This fantastic website provides a succinct and highly digestible, visual representation of all major infrastructure projects in Australia and New Zealand. It allows you to sort by project budget, location, type of project and project status. 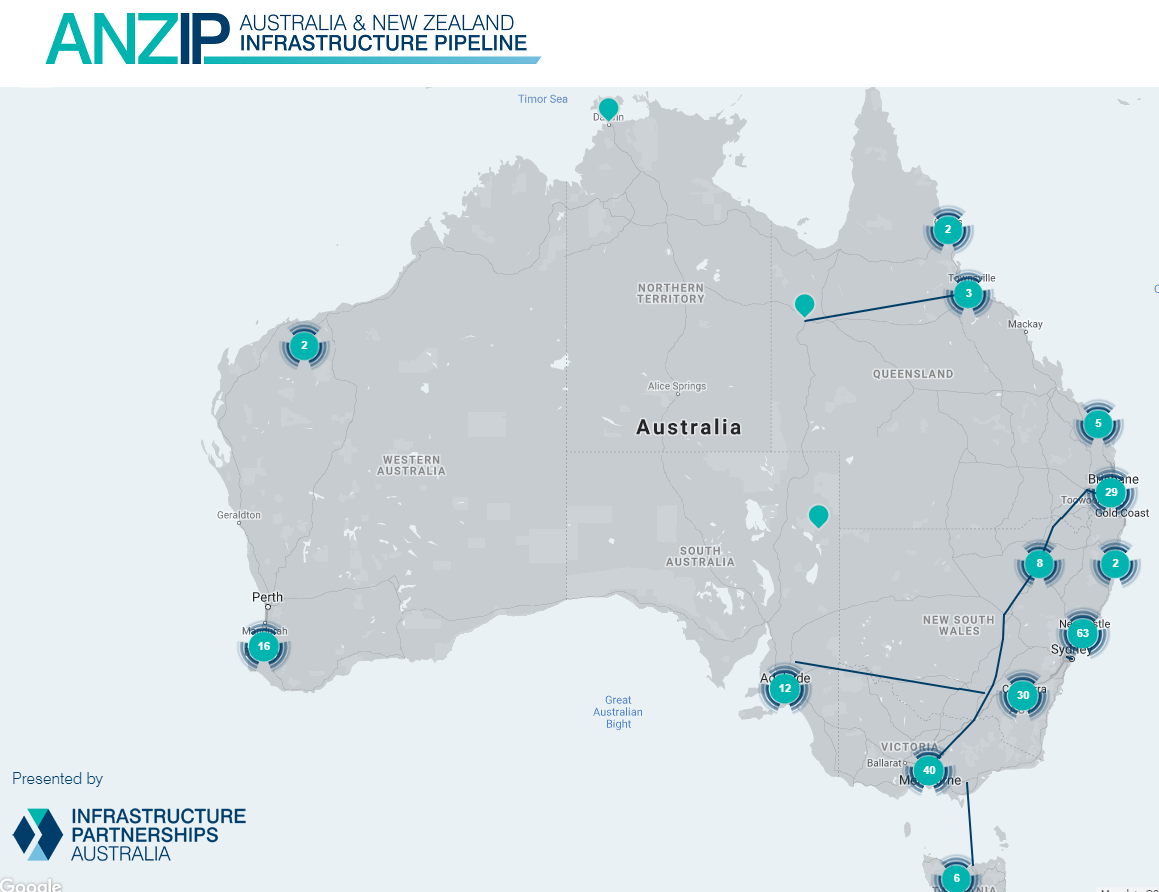 The two graphs below give you an idea of the information provided. It’s interesting to note the large amount of work which is announced but not yet under procurement. In NSW alone this figure is almost $45 billion, showing that there is a huge volume of work in the near term which is yet to reach the market.

The graph below further reinforces this point by showing very clearly how much budget still remains in the very early stages of the pipeline.

I highly recommend checking out the websites mentioned above if you’d like more information. Looking at this data, we are clearly in a golden age of opportunity within the construction industry, as the government spends more than it ever has in order to keep the country moving and growing.

What do you think? Is the growth in infrastructure investment sustainable in the long term? We're keen to hear your opinions.