Mental Health Within The Construction Industry: Why The Industry Is Losing So Many Workers To Suicide

Mental Health Within The Construction Industry: Why The Industry Is Losing So Many Workers To Suicide

over 1 year ago By Emily Harris

As awareness in mental health grows, our community is slowly learning the significance our work lives have on our mood and overall mental state. With COVID-19 putting additional strain on many industries and R U OK Day (Australia’s national day of action for mental health) just around the corner, there has never been a better time for industries to take an introspective look into their current work place practices and culture and determine if they’re fostering a positive work environment. For the Australian Construction Industry, the issue of mental health is not a new one. Research over the last decade has revealed construction workers are overrepresented in suicide rates in Australia while the industry possesses disproportionate rates of mental illness. In fact, every year 190 Australians working in the construction industry take their own lives; this equates to losing a construction worker every second day to suicide. Construction workers are six times more likely to die from suicide than a work accident while PwC concluded in a recent report that 21% of workers within the industry had admitted to suffering from a mental health condition.

Construction plays an integral role in Australia’s economy; prior to 2020 it comprised of over 330,000 businesses nationwide and directly employed over one million people (around 9% of the total workforce). Because of this, construction will no doubt play a significant role in Australia’s post COVID-19 recovery, which is why it is crucial to shine the spotlight on why mental health problems are so prevalent. More importantly, as we learn more about mental health and wellbeing and how integral a role it plays in the workplace (both for the individual and the business overall) we need to ask ourselves what can be done to change these statistics for the better.

Why is it happening?

One of the more obvious contributing factors to the industry’s rising mental health problems is the job itself- it is physically and mentally demanding. The hours for most workers, especially in more senior and project management roles are long, in order to achieve tight project deadlines. In fact, during the 2016 Census, it was found that Australians doing manual labour worked the longest hours in the country. Miners spent the longest time at work, with nearly 50% of employees clocking over 49 hours per week, closely followed by construction workers (including carpenters, builders and plumbers). This is considerably more than the 38 hours per week with reasonable overtime which the Australian Building and Construction Commission consider to be standard hours of work. Construction sites also contain a lot of ‘physical stressors’ including excessive noise, shift work (often overnight), physical strains to the body (heavy lifting etc) and an increased chance of worksite accidents, especially if the worksite isn’t up to HSEQ standards. Most tradies also have non-standard work schedules, as they’re usually employed on a project by project basis. The lack of job security can cause added stress, particularly in the current climate where COVID 19 restrictions have significantly impacted the number of projects going ahead, especially in Victoria.

In case studies conducted by the University of New South Wales (UNSW), which looked at the impact the job itself had on a number of different construction workers, 70% of participants claimed they had experienced mental health issues (anxiety, depression and stress) as a direct result of their work environment. One male construction professional stated: “I work a massive day, early mornings and then come home around 6/6:30; you have dinner, put the kids to bed and then back on the computer for another couple hours working. So 10:00pm is probably the norm and then midnight could be something like the other nights. And doing that has just been taking its toll.”

Another significant impact to workers’ mental health is workplace bullying and hazing -especially to young apprentices- that occurs on job sites. A recent study conducted by the Australian Institute for Suicide Research and Prevention (AISRAP) found that 27.3% of apprentices within construction and mining had experienced workplace bullying and alarmingly, 30% of respondents reported having thoughts about suicide in the past 12 months.

Suicide prevention charity MATES in Construction said a culture of silence surrounding ‘hazing rituals’ within construction has been detrimental to the increase of workplace bullying on site. According to charity founder Jorgen Gullestrup, tradesmen can often see hazing rituals as their duty, to ensure they’re hardening the apprentice up to survive in the industry. However, these hazing rituals and practical jokes can often cross the line into bullying territory and have at times caused serious accidents on site. One apprentice had his shirt caught on fire in a case brought to the Communications, Electrical and Plumbing Union, while another had a live mouse put down his shirt. There were also a number of cases brought forward by female apprentices who had experienced sexual harassment onsite. However, most bullying incidents don’t get reported. In the study by AISRAP, the majority of bulling victims were afraid to come forward about their experiences because they didn’t want to lose their apprenticeship or damage their career. Unfortunately, when workplace bullying is undetected, it can create a vicious cycle where it continues to happen to newcomers and instils a culture where it’s accepted practice. It also creates added stress and anxiety to the individual apprentice, two key contributors to poor mental health.

Delving even deeper into the behaviours of workers on site, research has identified that a highly masculine work culture has had a direct impact on mental health within the industry. The majority of manual labourers -mining, construction, gas- are made up of males and research has identified that a predominantly male workplace has created an environment full of stereotypical characteristics that are having a negative impact on the individual. In the same study conducted by UNSW, researchers were able to identify three common values across all the work sites they reviewed; control, efficiency and devotion to work. The evaluations also revealed that a strong sense of stoicism and self-reliance was encouraged among workers- the notion that the individual should be able to handle their problems. One participant who was interviewed described a scenario that occurred to one of his colleagues, where he had been under a lot of stress to complete a project. However, by ‘pushing through’ and making the project deadline he was able to prove himself to his supervisors and ‘he’s now set himself up for life’.

By fostering and rewarding a total devotion to work and the notion of ‘getting on with it’ many individuals who display different values are seen not to ‘fit in’. For example, those that ask for flexible arrangements or negotiate part time work – especially working mothers- are perceived not to be fully committed to their job. Worse still, this emphasis on being self-sufficient doesn’t create an environment where individuals feel comfortable letting people know when they’re struggling, resulting in many workers suffering in silence. 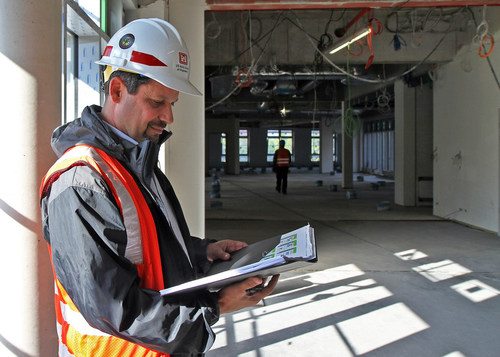 What can be done?

Like in any industry, it’s always easier to tackle the things we can see; over the past decade construction, mining and energy sectors have been working hard to ensure job sites are physically safer than ever. There has been a tightening on regulations and Safe Work Australia has been diligent in ensuring WHS regulations are being met on site, which has all helped to reduce on site fatalities in Australia by 48% between 2012 and 2017.

However, while the physical stresses tradies face are being minimised, there are still deep-rooted behaviours, values and attitudes within the industry that are putting young worker’s mental health at risk. While an organisation’s culture can be harder to change as it’s created from so many intangible factors, suicide prevention charity MATES in Construction believe it’s achievable. They argue the key is to focus on awareness and education campaigns combined with good gatekeeper training.

Since launching their organisation in 2008, Mates in Construction have established community development programs on job sites and a 24/7 hotline throughout Australia for both the construction, energy and mining industries. MATES argue that the key is first to make people aware of the issue, educate them on why it’s happening and more importantly, let them know that suicide can be preventable. MATES achieve this through offering different training programs for worksites which educate them on the warning signs of individuals suffering from poor mental health, provide volunteers on site that people can reach out to, and set up support groups which encourage ‘mentally’ healthy workplace initiatives. MATES have also partnered with multiple research agencies to inform the industry on the best mental health practices, which they regularly promote through their own channels and programs.

Similarly, in Victoria the Australian Worker’s entitlement scheme Incolink developed a program in 2018 called Bluehats, where anyone involved in the construction industry can undertake training to become a ‘Bluehat Volunteer’ and offer support to those struggling on a job site. Incolink members also have access to free 24/7 council support.

Both initiatives aim to challenge the stereotype that burying your feelings and ‘getting on with it’ is the key to being productive at work. “Feeling stressed or anxious about something doesn’t usually go away overnight- especially if it’s due to your workplace environment. Besides, when we feel mentally strong and happy, we are at our most productive and focused, so it’s in everyone’s best interest within an organisation to promote mental health,” an Incolink volunteer stated.

Certainly, making people aware of the impact the construction industry is having on the mental health of its workers and educating the industry on mental health itself, is the first step in being able to change the industry for the better. MATES founder Jorgen Gullestrup believes that more widespread support in initiatives like MATES In Construction and Bluehats will help transform the industry’s ‘macho’ culture. “The more support we can receive - either from donations or becoming a sponsor or partner – the more we can demonstrate to the greater public that suicide is everyone’s business and we’re all responsible for looking after our mates, at work or otherwise.”

For more information on Mates in Construction and how you can get involved, click here

For more information on Bluehats and how you can get involved, click here